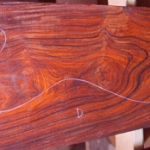 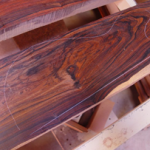 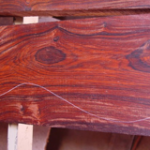 …but which one is going to the ball?  I don’t know yet.  ‘D’ is my current favorite, mostly because of the striking grain at the bout and the bubbly patterns near the horn.  Originally, I was leaning toward ‘A’, because it would yield the darkest end result.  But in the end, I think ‘D’ has the most interesting character of the bunch.  The templates are oversized by about 1/4”, so in the end, I might shift their positions slightly before a final decision is made.

Mica (pronounced MY-kuh) has urged me not to choose just yet – there were some new arrivals over the Memorial Day weekend, and she has selected two more slabs of Coco Bolo and put them aside.  She wants this project to get first crack at them, because she thinks I’ll REALLY like this batch.  I won’t have pictures until next week, so this will likely be the last entry until then. 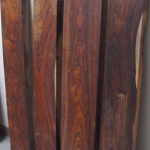 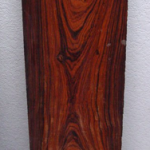 One of the first and most important considerations when building a guitar is selecting the wood.  What you see here are incredible examples of Coco Bolo.  Considered by many to be the ‘king of the tonewoods’, I will be using Coco Bolo for the top and back laminates of the guitar.  Coco Bolo is incredibly dense (it does not float).  Not only does it look stunning when finished (the pictures above are raw, unfinished samples!), it really helps the instrument deliver a full sound spectrum.  After giving Alembic some characteristics to look for, this is the first round of selections sent for my consideration.

Coco Bolo is a tropical wood.  Although not technically a rainforest wood, it does grow on the fringes of such climates, particularly along the western coast of Mexico.  This wood is highly prized and, at times, has been over-harvested.  Alembic tends to use Coco Bolo that has fallen due to hurricanes and tropical storms.  They do not support the premature death of Dalbergia retusa.  Rather, they choose to honor the fallen by giving it a second life as part of a beautiful musical instrument.

Besides music, another thing that Jack really admired was fine woodworking.  Although no carpenter, the house I grew up in has little masterpieces of Dad’s handiwork throughout.  There are beams and window casings, all expertly cut, finished, and stained… the closets he made in the bedroom I grew up in are perfect examples of the attention to detail and quality craftsmanship that Dad so admired.  When I was a bit older, the toy closet was transformed into a beautiful stereo cabinet, complete with in-wall connections for remote speakers, power dressings, tasteful lighting, and an ingenious (for the 1980s) method for redirecting IR remote commands over coaxial cable so I didn’t have to get up and go to the closet when I was in my body cast.

In fact, to this day, I still haven’t met anyone that could speak with such fluency and authority on topics like electronics, technology and technical design, sound quality, etc.  Dad’s other great influence on me is my love and interest in audio, technical design, and a permanent child-like wonder about how things work.

There are many luthiers out there that can help a musician realize a dream.  For me, though, there is only one group of people that so perfectly personify so many things that remind me of Dad – the kind people at Alembic.

First of all, I STRONGLY urge you to read Alembic family history.  If you knew my father, it will be immediately apparent how fitting (on so many levels) it was to choose them.

Ron Wickersham and his wife Susan started Alembic in the late 1960s.  Ron was an electronics wizard at Ampex, and engineered several Grateful Dead albums, such as ‘Aoxomoxoa’ (where he designed the first multi-track mixing console for studios that used the new Ampex 16-track recorder and ‘Live Dead’ (where he pioneered techniques for live rock concert recording still used today).  After working with the Dead to improve the sound of their live shows, it was discovered that their instruments were the weakest link in the signal path.  That’s when Alembic started retrofitting existing instruments, and eventually building high quality instruments of their own.  They had transformed themselves from sound and recording specialists to instrument makers.  An interesting side project of Ron’s was helping to develop the ‘Wall Of Sound’ and feedback-canceling vocal microphone design that brought the Dead’s live PA quality leaps and bounds beyond what was conventionally available.

Susan Wickersham is an accomplished artist – and among many other great things, a master inlay artist.  Doug Irwin apprenticed under her.  Doug was know mostly for designing Tiger, Wolf, and Rosebud, Jerry Garcia’s three most identifiable guitars.

As things usually go with Alembic, Ron is designing the electronics for my guitar, while Susan (and her daughter, Mica) will be working with me on the actual construction and ornamentation of the instrument.  Susan and Mica have already forgotten more than you or I will ever know about wood selection and guitar making!

It is truly inspiring and humbling to be working with a team that has contributed so much to instrument design, live sound reinforcement, and location concert recording.

I like to think that Dad would be happy to know that the same people that built instruments for so many of the musicians he loved were now building one for his son.

If you’ve been invited to view this blog, you are either a family member or a good friend of mine.  You might also be a musician.  Perhaps you were also close to my father, or at least knew him somewhat.  If so, you might be particularly interested to know that this project is for him.

Most of you know that Jack passed away in September, 2003.  If you didn’t, I’m sorry you’re finding out through a blog – but such are the times we live in!  The impact he made on those that knew him were substantial and long-lasting.

As for me, let’s just say Dad had an incredibly strong and obvious influence on how much of my character developed.

What might surprise some of you, though, would be that I hold him as my strongest musical influence.  No, he couldn’t play an instrument, and was utterly incapable of holding a tune – even if you’re using the broadest possible definition of “holding”.  But one thing he did with absolute consistency was expose his young son to some of the most varied and significant music there was.  His ability to take music and place it in historical context always fascinated, entertained, and enlightened me.  It was kind of like being in a full-time music history class.  My musical sensibilities were shaped at a very early age, and I have Dad to thank for it.  He loved music, and instilled that love and appreciation in me as soon as those giant quadrophonic headphones fit on my infant head.

Since Dad was such an influence on this part of my life, it seemed perfectly natural to design a guitar in his honor.  Far from just another instrument to add to the collection, this guitar will undoubtedly inspire the recollection of memories and stories of years past.

My hope is that, by building this instrument, I will have much more than a guitar – we will have a family heirloom that can be passed down, along with Jack’s story, to all the Eichingers that never got to meet him – but not before I get some serious playing time on it!

Today, I’ve officially commissioned a guitar!  This is a very exciting day.  After months and months of planning, going over countless details, and deciding on almost every aspect of this instrument, everything is in place for the hard work to begin.  In the coming days, I’ll be posting more info, including some links to the builder, and the story behind this guitar.

This is likely going to be a very, very long journey.  I’ll keep you posted right here along the way.