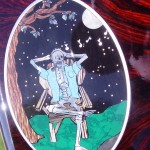 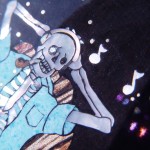 Today, I am proud to offer a very significant update to this journey.

Alembic has spent months turning one final detail of my vision into reality.  That would be the beautiful diamond, now inlaid into Jack’s right eye… and now you know why the guitar is named Diamond-Eyed Jack!  (Yes, the actual lyric in ‘China Cat Sunflower’ is often quoted as “diamond-eye jack,” but Robert Hunter’s lyric book adds the ‘d’ to eye, so I’m going with that.)

An unbelievable amount of thought, preparation, and practice has gone into this one detail – so much so, that you could probably write a blog on just the eye alone.  In future postings, I will take you through some of the process – which has been fascinating, at times frustrating, but altogether necessary, and in the end, flawlessly executed.

Alembic had to create several material mockups, in order get the procedure down just right before they committed to drilling into the medallion.  They even went so far as to purchase some actual diamonds, because they were not convinced the cubic zirconia samples they had initially been using would accurately represent the luster and reflection a real diamond would provide.

They eventually discovered that they didn’t have an appropriate tool to make the cut.  After trying all sorts of cutting devices, they went out and purchased a specialized jeweler’s countersink.  It differs from a traditional countersink, in that it has something like 18 cutting edges instead of the much lower number usually found on its woodworking equivalent.  Also, the tip is especially sharp, whereas countersinks made for wood are generally dull by comparison at the point, since they are often used in conjunction with a traditional drill bit.

With the right tool for the job in hand, they set out to perform all sorts of tests – sinking diamonds flush with the surrounding material, mounting them proud of the surface, backlighting them with special low-power LEDs…  In the end, and with a unanimous decision, we opted for a flush-mount, non-lit diamond, adding just the right amount of twinkle to Jack’s eye.  It took many months to get there, but the methodical approach to every aspect of this critical detail has yielded undeniably stunning results.

It would be great if the story ended there, but that’s really just the set up.  Going out and purchasing the perfect diamond for this project would be easy enough, but wouldn’t it be extra special if the diamond itself had a deeper meaning?  Well in this case, it does.

At some point, my parents did a curious thing.  They took their wedding bands, and melted them down to make one ring.  In that ring, they set one large diamond and many tiny diamonds, sourced from my grandmother’s (on my mom’s side) wedding ring.  The new ring was decidedly masculine, and my father started wearing it all the time.  Within the family, we jokingly called it the ‘Star of Eichinger’.  Dad was not what anyone would call a jewelry freak, but for some reason, he was able to pull this one off.

I, on the other hand, cannot.  The ring, now in my trust, had been destined to sit quietly in a dark jewelry box, rarely seen.  I could not sentence such a piece of family history to that lonely fate, so from the very beginning of this project, it was my intention that Jack’s eye was going to ensure the ‘Star of Eichinger’ continued to be a part of our family’s story.

I brought the ring to our local jeweler, and, after a well-deserved steam cleaning, picked out the nicest of the small stones.  He knocked it out for me, and I promptly saw to it that the stone arrived safely in Santa Rosa.  It was important for Alembic to have the stone on hand early, because its size would determine the scale of the entire medallion.

The diamond was finally set two days ago, and just yesterday, the entire medallion was inlaid into the body of the guitar.  You can now see the finished piece, elegantly bound in a ring of sterling silver.  The original design, if you recall, had smoke rising from the pipe, but the mockups just looked too busy – art is equally determined by what you leave out as it is by what you present.  The medallion has been covered in a coat of optically clear epoxy, allowing the instrument to continue through the finishing process.  During this process, the instrument is sprayed with sealer, allowed to dry, and then sanded.  This dance is repeated until there are enough layers of sealer to make the instrument smooth to the touch, and adequate protection is provided.

It really will not be long now before it’s done.