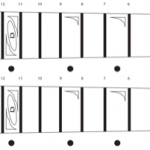 A day later, and I’ve got two variations on the original design.  I asked Mica to give the wedges a little more character for this round.  The results are shown above, including a fret marker detail.  It’s amazing what a small variation can do!  At the very least, I haven’t seen this exact shape on any other fingerboard.  At the same time, it retains the simplicity I asked for.  Simple and unique – just what I’m after.

Version three (the bottom fingerboard) shows a clever design where the markers travel up the thumb-side of the neck, but then “change lanes” at the 12th fret, continuing up to the nameplate on the finger-side.  At first, I wasn’t crazy about this design, but the more I look at it, the more I am warming up to this layout.

I do have at least one more idea for the shape of the wedge, and I will probably have another fingerboard layout with that design in a few days.  After that, I’ll probably sit on the fingerboard ideas for a bit, to make sure I’m at peace with my final decision.

Shown here is Alembic’s first pass at the fingerboard inlays.  This is not the final design, but I need them to give me something that I could provide feedback on.

I asked for them to start with a traditional sidebar inlay, but wanted the shape modified in some way.  I am after a simple, repeating shape that stays clear of the center of the fingerboard, and this wedge is Alembic’s starting point.  The 12th fret features my initials bound in an oval of sterling silver.  The guitar’s name tag will be up at the 24th fret (it is misplaced in this picture, and won’t say ‘DE’.)

I am expecting several revisions of this design, but I don’t think it will be drastically different.  The wedge shapes will change, and I’ve asked that the oval be skewed to neatly fit between the two inlays of the 12th fret.

Materials-wise, the fret markers (with the exception of frets 12 and 24), as well as the ‘CJ’ initials will be black Tahitian mother-of-pearl.  The inlays at the 12th, 24th, and tulip-end of the fingerboard will probably be the more traditional white mother-of-pearl.

I should have some new drawings later today to mull over.  I’ll post them here so you can see its evolution.  Meanwhile, a materials mockup of the medallion has been promised to me shortly, so hopefully I’ll have all the inlay decisions made in the near future and they can start the cutting!