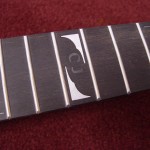 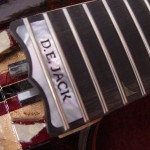 The guitar gods sure have been busy lately!  The custom inlays for the fingerboard are now in, and it has finally been fretted.  It looks like a guitar now!

The plan for the fingerboard was finalized about 15 months ago, after many months of design evolution.  From the start, I knew I wanted a simple, one-of-a-kind design, using just a few different, understated materials.  I insisted the fret markers stay away from the center of the fingerboard, and that we use an uncomplicated, repeating shape that would be unique to only this guitar.  Eventually, we came up with the scalloped wedge motif which runs up the low E string, then “switches lanes” to the high E at the 12th fret.  They’ve since been nicknamed “delta wings.”

The nameplate is one giant piece of MOP, with lettering that is hand-cut all the way through.  A mixture of epoxy and ebony dust is used to fill in the letters.  Not only does it look awesome, it will survive many fingerboard sandings, if it ever becomes necessary.

It’s an incredible milestone that ALL the inlay work is now done.  Now the guitar goes back into spray, getting 1 coat of finish every 24 hours until it’s ready for the final rubout.  We’re sprinting to the finish line.